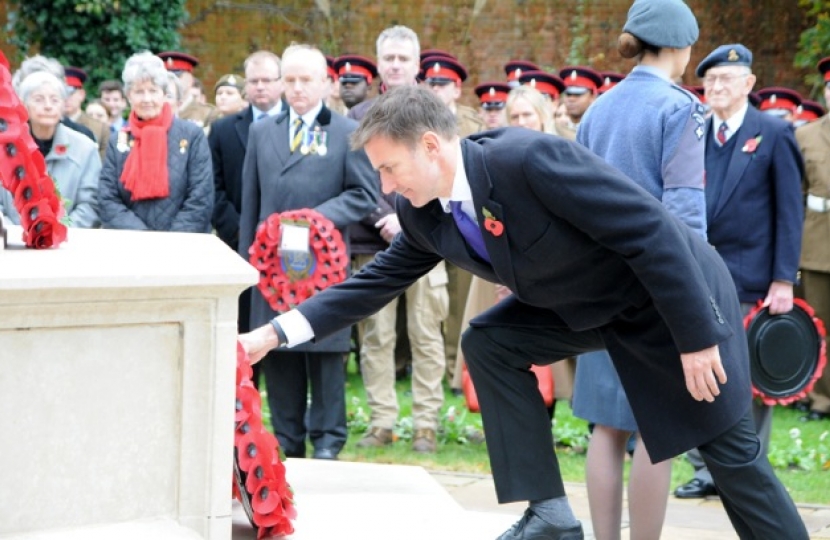 It has been quite a year and it is sometimes hard to internalise how much things have changed. Just six months ago we worried about Ed Miliband becoming Prime Minister… and instead we have a Conservative majority government putting into action some policies that will set our country up for the long term. Thanks to the hard work of my brilliant team in South West Surrey we increased the majority to 28,556 – which means during my time we have moved from being the 6th most marginal seat to the 4th safest. What makes me most thrilled is that in all our work locally we still behave like a marginal seat, never taking a single vote for granted.

I told David Cameron I would like to return to the Dept of Health and whatever the challenges and battles it remains the greatest privilege of my life (apart from my wonderful family).

Our frontline NHS staff work incredibly hard and my job is to make sure they really can deliver the high quality care they passionately want to: right now that means making the difficult changes to make sure services are better at weekends, but more generally it means building a learning culture where we are honest about mistakes and learn from them – rather than call in the lawyers, as happens too often in healthcare.

So much work to do – but I am pleased that 9 of the 24 hospitals put into special measures under the regime I set up have now come out, and the proportion of patients getting four of the most common harms (pressure ulcers, falls, VTE and UTIs) has fallen by nearly a half during my time as Health Secretary.

There is a long way to go but with the extra money announced by the Chancellor to fund the NHS’s own plan for the future, there is now the prospect of turning a corner for our most precious national institution.

Within South West Surrey, we have made significant strides on some important local issues. As well as my supermarket surgeries which are now in their 10th anniversary, we have received confirmation from South West Trains that they will be constructing an additional deck at Haslemere station car park which will go a long way to dealing with the commuter street parking issue that has been such a nightmare.

In Farnham we are making progress with Surrey County Council on the pedestrianisation proposals following the referendum – the challenge now is to find a scheme that is financially viable and practically possible. We have also secured agreement to fund an extra 180 car park spaces at Farnham Station.

In Godalming, flooding is still a great concern particularly at this time of year. I have brought together the key stakeholders and we have a good plan in place, but the next few months will be critical in establishing whether we can get funding for it.  The next step is an open meeting for residents in January.

We also had a terrific 2nd Waverley Para Games at Charterhouse School Club with more than 100 children. Many thanks to Active Surrey, Sport Godalming, the COINS Foundation and The DFN Charitable Foundation for their generous support as we turn this into a regular fixture for disabled children in our area.

Broadband continues to be an issue in many of our villages (including my own house in Hambledon!), but BT Open Reach and David Cameron have reiterated their commitment to give everyone access to a fast, internet service. I have my next meeting in January with BT Open Reach’s CEO and will be writing to those affected with an update.

I have also had some wonderful visits during the year including – The Helen Arkell Dyslexia Centre in Frensham, Green Oak School in Ockford Ridge, The Alzheimer’s Society in Haslemere and The Meath in Godalming.

One of the new campaigns I will be addressing in 2016 will be that of loneliness and supporting those in our community who are perhaps on their own and would appreciate a bit of friendly company or support every so often. Only 16% of older people live with their children – a third of the rate in Italy – and as our population ages this is an issue I believe we need to return to as a society.