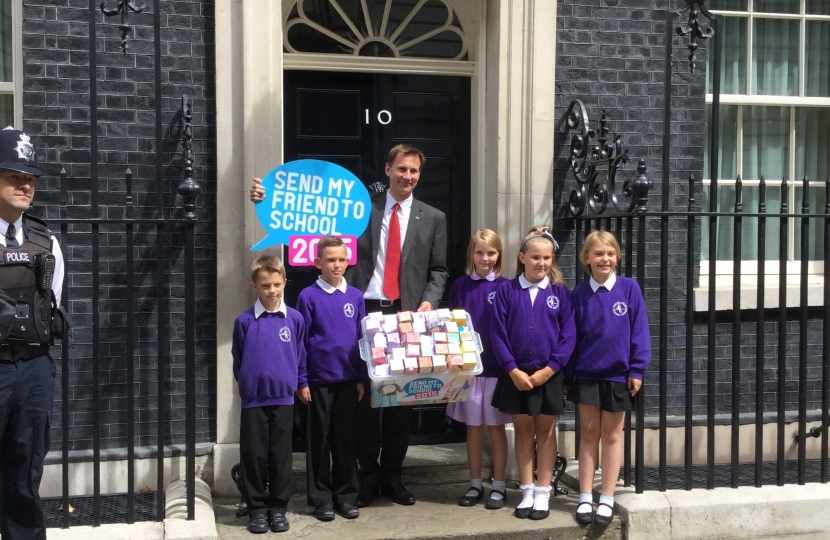 Jeremy Hunt MP for South West Surrey joined children from Loseley Fields School, Godalming today on the steps of No.10 Downing Street as they handed in to the Prime Minister their very special petition supporting the Send My Friend To School Campaign The students delivered messages from their classmates about the global education crisis, and asking their MP to pass the messages to the Prime Minister.

The visit took place just a couple of months before the UN General Assembly in September, when world leaders will meet to decide how to tackle global poverty over the next 15 years. Nearly half a million children across the UK have this year stepped into the shoes of world leaders for the Send My Friend to School campaign, and told their local MPs how they would deliver a better future for the world’s children if they were in charge. Hundreds of MPs have taken part, and have passed the messages to David Cameron.

Corina Mayhew at Losely Fields Primary said: “Year 5 have been learning about the barriers to education for millions of children in the developing world. It’s been fantastic to see how much they’ve enjoyed stepping into the shoes of world leaders and trying to make a difference for children that don’t have the opportunities they have.

“They created 3D figures of themselves as world leaders and covered them with messages to tell politicians what needs to be done to get education for every single child worldwide. They’ve now handed these to Jeremy Hunt MP, to remind the UK government of their promise to send every child to school.”

Jeremy Hunt MP for South West Surrey said, ' Every child has a right to an education, providing them with the best route out of poverty. It is a tragedy that more than 57 million children around the world still do not go to primary school but significant progress has been made over the last decade and this Government has committed to help at least another 11 million children in the poorest countries gain a decent education by 2020.  The young children from Loseley Fields School should be proud to know that they have joined so many others to be part of a campaign to provide a better future for every child and I am very happy to support them.