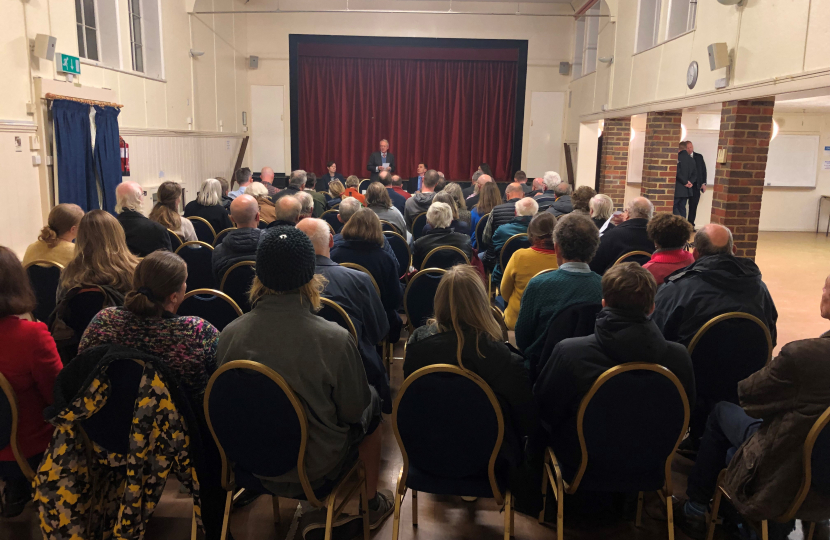 The packed Hall was an opportunity for members of the public to voice their concerns over sewage overspills into the River Wey and other streams.

Jeremy commented after the event:

"For a year now I have been running a Green Spaces campaign to reduce sewage overflow discharges into the River Wey and a tributary of the River Arun that flows through Chiddingfold. Last week I wrote in the Farnham & Haslemere Heralds that in 2022 alone we had the equivalent of 65 continuous days of sewage being pumped into our local rivers. 2000 local residents have signed my petition to cut sewage discharges which happen when rain causes wastewater systems to overflow. The government this year passed a law requiring water companies to invest £56 bn to stop this problem by 2050 but I want to know what can been done sooner than that in SW Surrey.

"So today we had a public meeting in Bramley at which the guests Sarah Bentley, CEO of Thames Water, Kay Taylor, Chief Customer Officer of Southern Water and Alan Lovell, Chair of the Environment Agency. There were lots of issues covered including whether the fines paid by water companies could be used to speed up the cleaning up of rivers; whether planning regulations should be changed to require developers to connect rainwater pipes to the surface water system as opposed to the wastewater system; whether it is safe to swim and why it takes so long to clear up problems when people contact the water companies. Both the water company representatives were very honest about their failure to tackle this issue to date and both are under new management which has not been taking out dividends.

"I wanted to know whether we are going to see progress soon. Because the Wey is a sensitive catchment area environmentally it will see investments that mean an 80% reduction in discharges by 2030. Weather variability means we cannot guarantee discharges will go down year on year but I was promised imminent investment (e.g. next year) by both water companies and will post what that is going to be when they let me know".

You can still sign up for information and updates on River health. Please email: huntj@parliament.uk