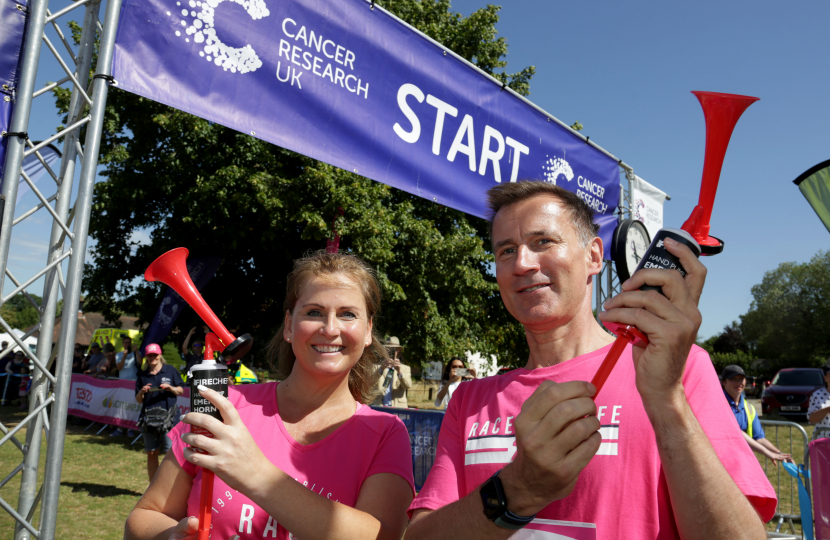 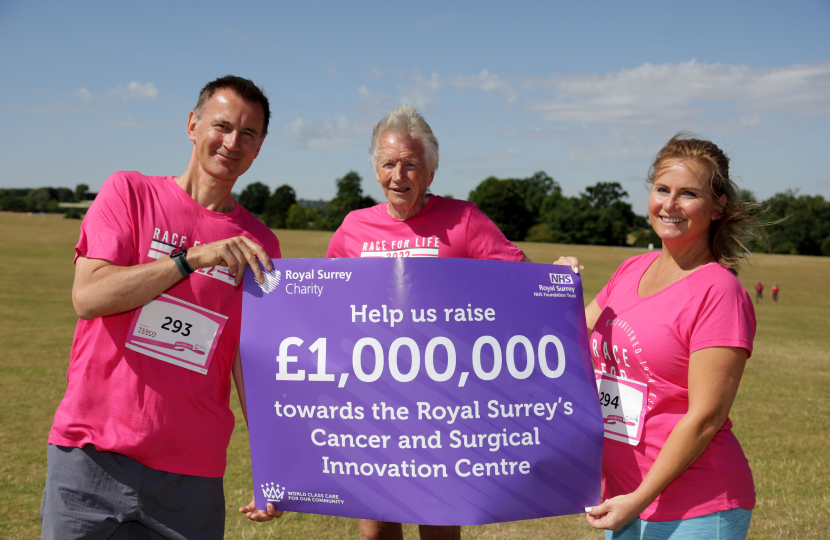 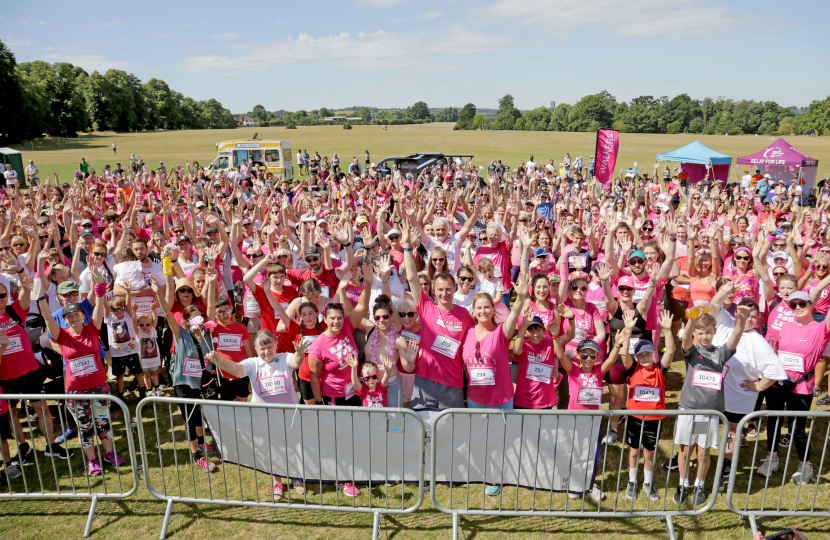 POLITICIAN Jeremy Hunt stepped up his campaign to help beat cancer today (Sunday 24th) as he united alongside 600 people in Cancer Research UK’s Race for Life at Guildford’s Stoke Park.

The MP for South West Surrey was joined by constituent and cancer survivor Rod Pluthero from Haslemere and the town’s MP Angela Richardson to take part in the 5k event.

The weekend’s activities at Stoke Park included Pretty Muddy, a mud splattered obstacle course for both adults and children as well as the 3k and 5k events, raising £45,000 for life-saving research.

Last month the former Health Secretary and currently Chair of the Health and Social Care Select Committee revealed how every member of his family had been affected by cancer, including a minor brush with the disease himself.

Mr Hunt said: “Race for Life is an amazing thing, 400 events around the country and it’s so important because half of us will get cancer in our lifetimes. There isn’t a family in the country that hasn’t been affected by it. And the great thing about cancer is we can be optimistic.

“There’s so much progress in science and research and Cancer Research UK is one of the biggest research charities in the world for cancer research so it’s all going to a fantastically good cause.”

Mr Hunt, Ms Richardson and Mr Pluthero, are supporters of the campaign to establish the Cancer and Surgical Innovation Centre at the Royal Surrey Hospital in Guildford. Mr Hunt launched a multi-million pound appeal to establish the centre last year.

He said: “We’re really lucky to have a regional cancer centre in Guildford but like everywhere in the country there’s a real backlog after COVID and they need to expand their capacity. They want to buy some of the most modern robots to do the very latest surgery and that would save hundreds if not thousands of lives locally when it opens, hopefully next year.”

Ms Richardson said: “Going through cancer is a tough thing. I’m not as fit as everybody else, Race for Life is hard for me but not nearly as hard as people and families going through cancer. So, if I can just do a little bit and put myself through paces in order to raise money for Cancer Research UK, hopefully that will make a difference.”

Mr Pluthero, 73, was successfully treated for cancer of the tongue in 2016 and again in 2018. But in 2020 he was given the devastating news he had squamous cell carcinoma in his lower right jaw. In a ten-and-a-half hour operation, surgeons removed part of his jaw and replaced it with bone from his fibula and saved his life.

He said: “Jeremy Hunt has done a lot for us by coming along to Race for Life along with Angela Richardson and a good time was had by all and we raised some money. We need to raise money for the researchers, they’re the people who can help us

“Cancer attacks blood, bone and everything in between so we need to fight it and they’re our soldiers. And anybody would come out in any weather for this.”

Every year around 55,800 people are diagnosed with cancer in the South East* and one in two people in the UK born after 1960 will get cancer in their lifetime.**

Money raised at Race for Life enables scientists to find new ways to prevent, diagnose and treat cancer - helping to save more lives.

Lynn Daly, Cancer Research UK’s spokesperson in Surrey, said: “We are incredibly grateful to everyone who took part in Race for Life Guildford.

“Life-saving research is being funded right now thanks to our supporters who fundraise. The atmosphere at Race for Life Guildford was hugely moving- full of emotion, courage, tears and laughter as people celebrated the lives of those dear to them who have survived cancer and remembered loved ones lost to the disease.

“Now we’re asking everyone who took part to return the money they’re raised as soon as possible. Funds raised - whether it’s £10 or £100 will help scientists find new ways to prevent, diagnose and treat cancer, helping save more lives.”

Oonagh Turnbull, Head of Health Campaigns at Tesco, said: “This will be our 21st year in partnership with Cancer Research UK and Race for Life and we hope this year can be the biggest yet.”