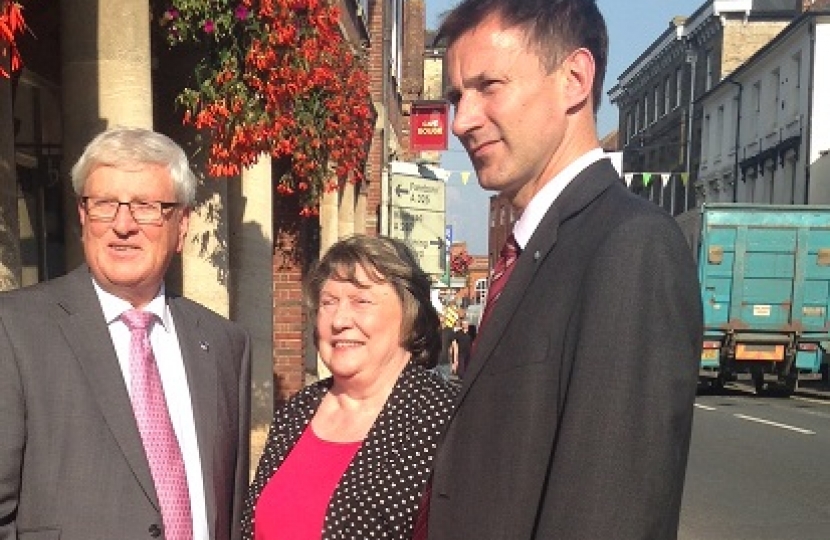 Following the victory in his referendum on pedestrianisation in June, Jeremy Hunt, MP for South West Surrey,  met on Friday 19th September with leader of Surrey County Council, David Hodge and County Councillor for Farnham Pat Frost in order to press ahead with establishing a viable pedestrian-friendly plan for Farnham and what the next steps might be for developing a scheme.  After their meeting Cllrs Hodge and Frost joined Jeremy in a ‘walkabout visit’ to the town centre in order to fully appraise what type of plan might be suitable for development.

Jeremy said, ‘I was delighted to be joined by the leader of Surrey County Council, David Hodge and also Councillor Pat Frost who heads up the Council's Waverley Local Committee. Collaborating with the Council at this early stage is imperative in establishing an affordable and workable scheme as so much of the work needed within the town centre will be overseen by the authority both financially and practically. We are already engaged in extremely positive discussion regarding what might be a suitable plan and I look forward to our continuing discussions.'

David Hodge said “Our discussion about shared space and pedestrianisation was very useful, and we will be giving careful consideration to Jeremy’s thoughts on this over the coming months whilst at the same time considering a number of other issues such as the financial pressures we face due to shortfalls in Whitehall funding for roads and schools.”

Pat Frost said, ‘Highways have already made a start on looking at the example plan outlined by Jeremy Hunt in the referendum.   This involves looking at the practicality of each aspect of the scheme together with an indication of costs.   I am hoping that a proposal together with the costs, might be available early in the New Year, if not before.”