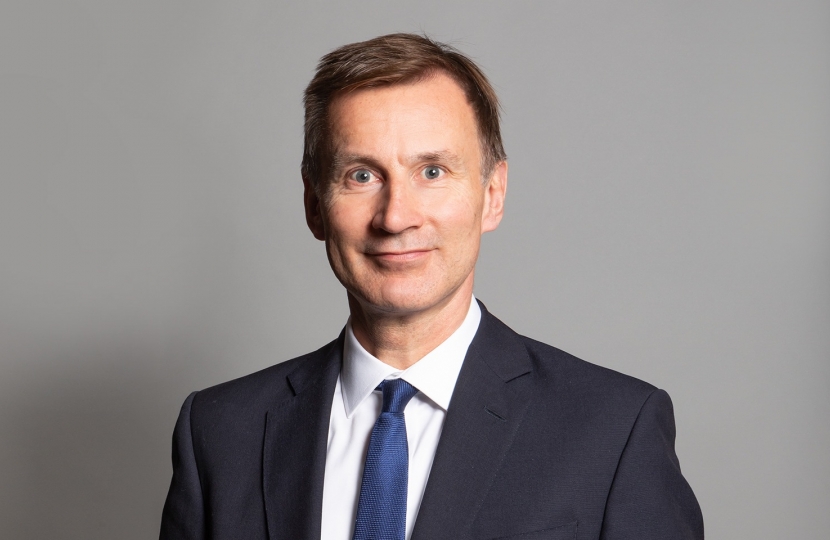 Good afternoon and welcome to my regular South West Surrey email update No 63. As of today, we have a total of 299,426 positive cases of COVID-19 with sadly 14 confirmed deaths in the UK. There are 4,679 confirmed cases in Surrey and 466 confirmed cases in Waverley. All data is accurate as of 11am this morning and available from here.

Spain Saturday afternoon saw the government re-impose the quarantine restrictions for people arriving into the UK from Spain. This follows an alarming increase in the number of new cases throughout the mainland which started in the middle of last week and has only increased significantly since. There has been some backlash about the speed at which the decision was announced but having criticised the government for not locking down earlier in March I am not going to criticise them for acting much faster this time - this is a pandemic and if we want to travel we will have to accept travel advice is going to change at short notice. That is not to say it will not be a massive inconvenience to many families, including that of Transport Secretary Grant Shapps who will now have to quarantine as well. We’re all in this together as the saying goes. The rules around quarantine (and who is exempt) are here. Passengers entering the UK from anywhere outside the Common Travel Area must fill in this passenger locator form.

Getting fit With gyms re-opening at the weekend, the Prime Minister is seizing the opportunity to encourage the country to get fit and eat more healthily. I did a lot of work on Childhood Obesity when I was Health Secretary including introducing the sugar tax, getting schools to do a daily mile and ending sweets being sold near checkouts in large supermarkets. But if we are to deal with the fact that two thirds of adults are overweight we need to do more, so this is good news. I know some worry about a nanny state, but do we really think American laissez-fair is better than Nordic nannying on this issue? I for one do not want us to have the second fattest children in Europe, not least because of the massive increases in heart attacks, cancer and diabetes that comes with it. It also affects poorer families much more - and the long-term solution will need to do something not addressed in today’s measures which is work out how to stop the cheapest meals in the supermarket being the most unhealthy. The PM is leading the charge on this plan following follows his near-death experience earlier this year, as his explains in this video. You can read the full governments plan here. Meanwhile, you will probably spot me out piously cycling…

Handling the virus differently The Prime Minister admitted on Thursday evening that the government “could have done things differently” in its handling of coronavirus and said that there are “very open questions” about whether the lockdown was introduced too late. It’s a brave admission, but also one that requires us (MPs and the public at large) to accept that this is an event of a kind never experienced in the western world and so making some mistakes was inevitable - something the yahboosucks nature of British politics makes very difficult to admit. The PM also argued that the most significant reason behind the UK’s high death toll was because “We didn’t understand [the virus] in the way that we would have liked in the first few weeks and months.” You can watch the whole, very candid, interview here.

WHAT’S GOING ON IN WESTMINSTER

Mr Speaker. We may now be into Parliamentary recess but that doesn’t mean that work stops in Westminster. Mr Speaker, who surely deserves a break following his around the clock effort to keep the Commons working during the pandemic, has given an excellent interview explaining his job, the much needed re-development of Parliament and his fears about the effects of the new televised No 10 press conference. You can also hear about his struggles to keep his pet bird “Boris” in order when on the train.

Face coverings on public transport. I am very worried to hear from residents that public transport operators are not enforcing the wearing of face coverings on trains and buses. The law is unambiguous; you MUST wear a face covering on all public transport unless you have a medical condition. I appreciate that transport operators want to avoid confrontations and difficult situations on the bus and trains, but public safety is at stake so I have raised my concerns with both Stagecoach (the local bus operator), South West Trains and the local Transport Police teams. They tell me that the compliance rate is around 75% which is not, frankly, good enough, but they do say action is being taken. One constituent who is a radiographer for the NHS helpfully told me some important tips about wearing of facemasks which are; a) putting them on and off carefully is vital as the outside surface could be contaminated and should not be touched b) keeping hands clean is vital as even with a mask on we tend to touch our faces 15-23 times an hour c) used masks should be disposed safely in a bag d) you should still observe social distancing where you can to reduce the risk of infection.

I have been compiling a list of local groups working to support vulnerable residents. You can view them on this link.

THE ECONOMY AND JOBS

What next for the economy? EY, one of the big four auditors, is predicting the economy will not get back to pre-pandemic levels until 2024 as hopes of a V-shaped recovery recede. Considering the enormous economic contraction that has taken place over the past few months, this prediction isn’t as bad as some economists who think it could take a decade. I remember the dire predictions that we had during the 2010-12 recession so tend to take these ones with a pinch of salt, but it is going to be a longer road than we all first thought for sure. There are just too many uncertainties - a  vaccine or treatment could kick-start the economy in a way never seen before, while a cold and challenging winter may result in another lockdown. The best way through for all of us remains to keep shopping and going out, locally where possible and to follow the governments social distancing rules.

WHAT ELSE IS GOING ON

My thoughts on the last year. Following on from my Herald Article on Thursday marking the year since Boris was elected leader of the Conservative Party I gave an interview to Channel 5 about the past year, which you can listen to here.

Westminster Abbey. Sadly Westminster Abbey is planning to make about 20 per cent of its staff redundant after the coronavirus crisis left a £12 million hole in its finances - at a time when we have never needed our churches more.

And finally, are you frustrated in lockdown? Well, why not send your screams to Iceland (bear with me here). People struggling with the events of this year are being invited to let off steam by recording their screams on their phones and having them played over a loudspeaker in a remote part of Iceland. There are worse ways to let out our frustrations after all…

New centre will meet growing demand for cancer surgery for people in Surrey and across the South East.