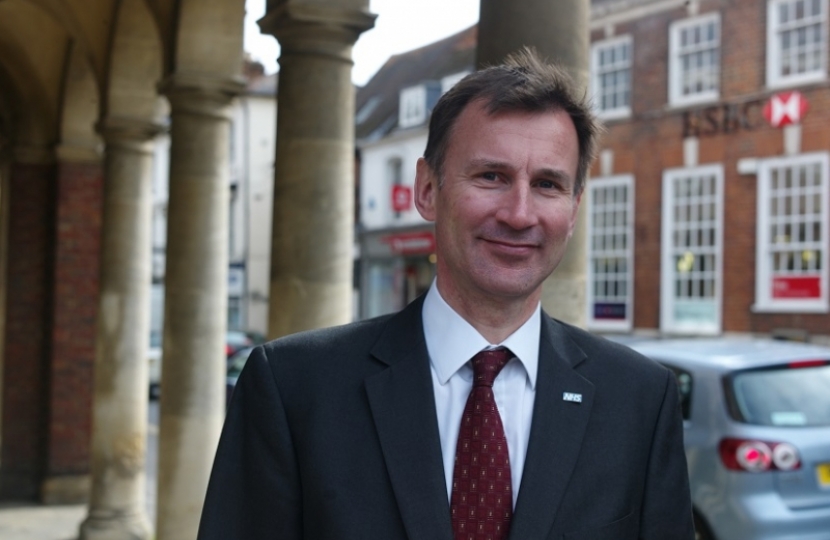 In the early hours of Friday 8th May, Jeremy Hunt was confirmed as being elected MP for South West Surrey for a further five years, following a landslide victory - winning 34,199 votes and increasing his majority to 28,556.  Having secured the seat in 2005 and re-elected in 2010 the 2015 local campaign saw Jeremy attending hustings across the constituency where he debated both national and local issues with UKIP, Labour, Green and the National Health Action Party candidates.

Jeremy said, ‘after ten years as local MP for South West Surrey I am so proud to be able to serve another term.

I am also humbled to be re-appointed Health Secretary, not least because of the enormous responsibility for hundreds of thousands of doctors, nurses and other NHS staff who are working incredibly hard right now and under enormous pressure. To them I want to say a heartfelt thank you for all their efforts, with a simple message: like you I want the NHS to be the safest, most caring and highest quality healthcare system in the world. My biggest priority now is to transform care outside outside hospitals. All of us want every single older and vulnerable person to be treated with the highest standards of care - so we need a step change in services offered through GP surgeries, community care and social care. That is my mission, and I know it is the mission of the whole NHS too. I look forward to working with our brilliant frontline professionals to truly make our NHS the safest and most caring healthcare system in the world.

In South West Surrey I look forward to pushing ahead with many campaigns including the development of a long term flood defence scheme for the area and continuing to improve on supporting communities, individuals and families affected by dementia.

There will be many challenges ahead both locally and nationally and I hope anyone who wants to discuss them (and indeed give me a hard time over them!) will feel free to come to one of my surgeries. ‘