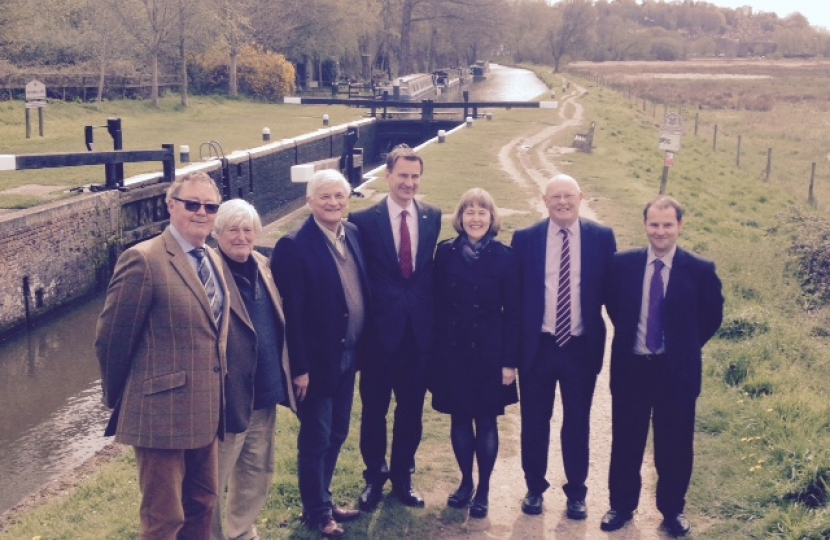 Jeremy Hunt MP and senior members from The Waverley Infrastructure Resilience Group (WIRG) met today to announce they have signed a Memorandum of Understanding (MOU) to fund a new flood defence system for Godalming.

An assessment by the Environment Agency to review potential schemes to reduce flood risk in Godalming has now been carried out. It identified, at an outline level, that there are technically and economically viable options for reducing the risk of flooding in the Meadrow and Catteshall Lane communities. These options were presented to the public at a drop in meeting in the town in January.

The estimated cost of the preferred option involving raised defences along Meadrow, is approximately £3.8 million (including £700 thousand of maintenance costs over the lifetime of the defence).  In addition to the funding from central Government, £2.3m of partnership funding contributions are needed to construct the scheme. These contributions have now been secured in principle from a wide range of partners including Surrey County Council, Godalming Town Council, Waverley Borough Council, The Thames Regional Flood and Coastal Committee, Thames Water and Scottish Southern Electricity.

The new scheme will comprise a raised wall or embankment between Hell Ditch and Meadrow and a flood gate on Cattershall Road. Residents will be consulted on the design of the embankment, so that the solution will blend as much as possible into the environment whilst providing the essential barrier needed in the event of a significant rise in water levels.

Jeremy Hunt MP said: “Since we formed WIRG, the aim was clear – to look at a viable solution that would protect our historic town of Godalming against the risk of future flooding. To date, considerable hard work has taken place and I am delighted that we can finally announce the go ahead for the scheme. I would like to thank all parties for their time and financial contributions.”

David Bedlington, FCRM Manager for the Environment Agency commented: “Godalming has experienced serious flooding in 1968, 2000 and 2013. We are confident that the solution we have devised with WIRG will prevent Meadrow flooding if the events we have seen in recent times are repeated.”

Robert Knowles, Leader of Waverley Borough Council added: “Following the drop-in session we held at The Borough Hall in January when 120 or so residents attended to view outline ideas and talk to experts, we received a positive response to the roll out of a flood solution for the town. The next step now is to finalise the proposal before work starts. Residents affected will have the chance to view the design and talk to experts in due course.”